Panorama with Jesus statue on the hill, Vung Tau, Vietnam 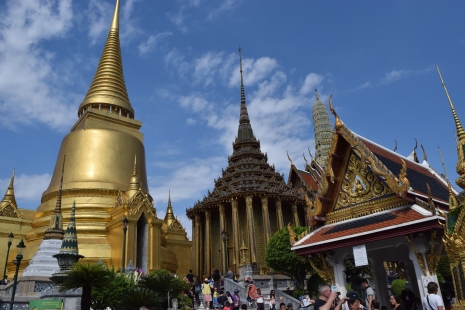 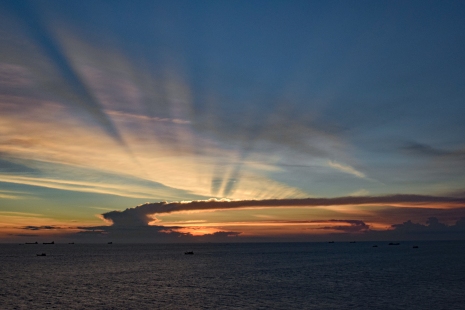 Skip, Nathan, and I in Vung Tau, Vietnam

View from the Jesus statue in Vung Tau, Vietnam

The dreary gray and smoggy days here in Mianyang persist into March, as the new semester continues. Forthcoming posts about recent activities in the works, however in this post I take a fond look back at the warm winter vacation I spent with two of my fellow Peace Corps volunteers in three sun-filled countries: Thailand, Cambodia, and Vietnam. I returned to places I’ve been as well as experienced the new. I’d been to Bangkok before, but nevertheless enjoyed the massive city; I took a new mode of transport between Siem Reap and Phnom Penh, Cambodia–a speedboat, which was definitely worth it; and ventured into Vietnam, all three of us for the first time.

Below are a few of the photos. I was especially enamored with Vietnam. My time there was short, on a few days, but from the sights of Ho Chi Minh City to the food to the beach at Vung Tau–I thoroughly enjoyed it all. 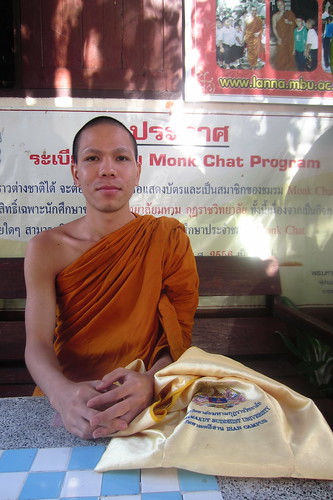 Last December I traveled to Chiang Mai, Thailand to run the 3rd in a series of 3 half marathons. I spent the remainder of my time bicycling around the old city eating delicious food and finding peace in the various temples. One afternoon, while walking around Wat Chedi Luang, I noticed a banner hanging from a building on the grounds with an invitation to speak with Buddhist monks, titled “Monk Chat.” Curious, I walked over to check it out. I had never actually spoken to a monk before, and the idea sounded intriguing. A young monk promptly greeted me. We sat down at a table and began to chat, just as the banner had suggested.

I asked about his life as a monk. He told me his days begin early in the morning at 4am, with meditation, cleaning, and preparation, continuing with breakfast and other duties such as reading, studying, attending class, or collecting alms throughout the day. They survive on charity from people through donations of merit offerings, carrying with them few possessions. He explained anyone can be a monk for any length of time.

Originally from Laos, the young man in front of me recently became a monk, and therefore still a novice. He is a student at a Buddhist university, learning about his religion and also studying English. I told him I had just finished two years as an English teacher in Indonesia, and asked what he wanted to know about my native language. Throughout our chat, he jotted down new words and idioms, always eager to know more.

Who knows the future, but it is probable this young man will choose to leave the monk order after graduating and pursue a normal life outside. Learning English, he said, is a valuable skill for the future that could have many applications.

After an hour, I began to politely excuse myself—I didn’t want to take up too much of his time. Before I left, he asked if I had facebook and would I accept a friend request to help him practice English sometime. Of course, I told him, a little bit surprised he had facebook.

I learned a lot that day—about the practice of another religion, the life of Buddhist monks, and the aspirations of one young monk in particular—and I’m grateful there is still a way to remain connected so we can continue learning and sharing.

July was my month off from teaching with no responsibility to be at either of my schools. Beleaguered by the slow-moving process to renew my visa to work in Indonesia, I had to leave again, so why not make a vacation of it?

The original plan was for Chiang Mai and Bangkok in Thailand and Phnom Penh and Siem Reap in Cambodia (where I met up with a good friend of mine). Along the way I had to extend my plans to include Singapore, where I would stop to arrange for the visa with the Indonesian Embassy (yay).

I was content with eating fabulous food, making discoveries on foot and bicycle, and peering into Buddhist temples. Since I’ve already been hiking in the jungle to a waterfall here in Indonesia, it didn’t seem so special to do that near Chiang Mai—besides, I totally felt right at home at the market there.

A friend of mine is working in Phnom Penh for two months, and what great timing that I could visit during my vacation time. A fun time was had just hanging out and also seeing the amazing temples at Angkor Wat. I also worked through some weird culture shock (American who has been deeply immersed in rural Batak-Indonesian culture traveling in Cambodia encountering American expat culture…I was lost to know what cultural norms to use).

Altogether 3 weeks, it was a lot of fun. Now it’s time to get back to teaching, so stay tuned for updates on that soon.

Please see the photos below! And find the whole sets on flickr for Thailand, Cambodia, and Singapore.