It is now past the middle of February, but here is a story from last Christmas. For Christmas 2014 I had the opportunity to be with my brother in Indonesia. To the Western audience it must be said that I don’t actually have a brother in my immediate family–this brother is my Indonesian family, and I am his sister.

The family system of the Batak Toba culture is more complex than in Western cultures. It is seen not only in how people are addressed in daily situations (the words for mother, father, sister, brother, uncle, aunt, grandmother, and grandfather), but also at a deeper level. The Batak people have distinct family surnames that are grouped together by ancestral line, which sets them apart from some of the other cultures within Indonesia (many Javanese have only one name). Those Bataks with surnames in the same ancestral group are family, and subsequently prohibited by culture to marry each other. To the Western ear it may ring as a bit harsh, but this is how they have kept true to their ancestors. They know when they meet a person in their group, that they really are family. Given this importance, it has never been nor will it ever be a custom for the woman to change her name in marriage; her family name is of higher importance.

What does this have to do with me? Because there is great pride in their culture and to share about it, some Batak people love to invite others into their family. I posted previously about preaching at a church, and the pastor and I have been close since. His surname is Lumbantobing (or just Tobing for short), and because he asked me, I am also boru Lumbantobing. It makes me think about family and naming, and what those mean. My family now extends far beyond my own blood and borders of my country.

I was glad to see my brother and his family for a few days over Christmas. Most of the time we were in the church, as the HKBP denomination holds worship Christmas Eve, Christmas Day, and the day after Christmas–but it was a blessing to be there. Mauliate, ito! (thank you, brother) 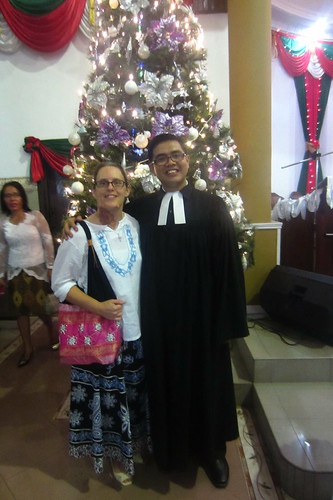 This post is a brief hello to say that I have made it and am doing well on my 3rd day here. After 28 hours of travel time, I finally arrived in Medan (Indonesia’s 3rd largest city and provincial capital of North Sumatra) on Sunday morning, April 1st. We spent the night there and then traveled by car to Balige on Monday. Because of traffic and a windy road with potholes, the journey took about 7 hours.

Enjoy these two photos below. First, one in Medan, then one of some of the students singing as I arrived at the HKBP Deaconess School. Stories, more photos, and video (I hope) to come.

the students sing their greetings