My plants were doing well in the warmth from the beginning of this month, though the recent cold damp week in the final days of the month have left them a little unhappy. The one little rose that didn’t die during the summer heat produced a few more buds. It has been dreary as of late, so I reflect on the last beautiful day a few weeks ago. Between rain and haze when it’s not raining, the winter months see less light.

It is a practice here for colleges to have military training for their freshmen. While many colleges have this training during the beginning of the semester in September, my college holds it in October. For two weeks after the holiday they trained and thus campus was filled with them in military-style outfits. They are, of course, their same bubbly selves, who talk of making friends and the handsome instructors.

Another notable event, that actually happened at the end of September was a small earthquake. I was in class at the time, a couple of seconds of shaking, but no damage. Two days later I had the opportunity to visit a memorial site for the 2008 Sichuan earthquake. That was an 8.0, caused major damage and many casualties. My students—many of whom are from Sichuan, though young at the time—remember that earthquake. There is a village that was left as a memorial. It was a very moving experience.

Enjoying the art school in the municipality of Chongqing

Some rest and relaxation in Chongqing

A brief visit to Chongqing to see friends. A view from atop a mountain, but not the best view of the city center.

My plants did well in the fall. 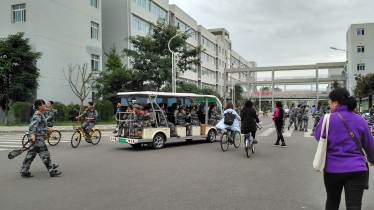 Students on campus on break from military training.

Cookout with friends at a nearby college 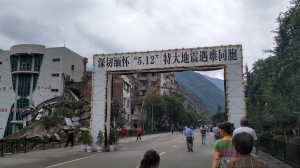 Memorial for the 2008 Sichuan earthquake