The Dubbing Competition and Just Rolling with It

So sometimes life in China as a university English teacher is a bit odd. We have to navigate a different culture, a different university system, and the sometimes awkward use of our own native language. My students seem well aware that spoken English in this country is often not correct, as they make jokes about Chinglish.

As Peace Corps Volunteers we’re prepped in our training about how things go here, culturally. Accept invitations, we’re told; first impressions are important, so make yourself known; and just “go with it.” Thursday evening was one of those time when all three applied.

A few weeks ago students excitedly invited me to a “Dubbing Competition.” Even after asking for clarification, I still didn’t know what that meant other than it had something to do with movies…and dubbing?. But one thing was certain: Myself, my Peace Corps sitemate, and another new foreign teacher were expected to attend and be judges in the competition.

Although I was told in advance, on Wednesday I received a decorated hand-made card–probably made by students on behalf of the Foreign Languages Department–inviting me to a “Dudding Competition.” Just roll with it.

On Thursday afternoon, 6 students were absent from my class, excused because they were preparing for the event. Just roll with it.

On Thursday evening, finally the event. There were about 10 other judges, and we gave scores on each performance. It was only living through the event that I realized they really meant “lip syncing” instead of dubbing. After the group gave a short intro-performance, they lip synced to a short movie clip. The clip was projected onto screens and both the language they were speaking and a Chinese translation was given.

Since this is the Foreign Languages Department, there were performances in English, German, Japanese, and French. Since I can speak German, I was fine with that, but even though I don’t know the others, I was nevertheless judging their pronunciation and performance. Yeah, just roll with it…

The best part of the night was seeing a group of my students perform the scene with the sloths in the DMV from Zootopia. That scene is something we all relate to and find funny. The whole room was laughing. And in that moment, it made all the oddity and dealing with the unexpected worth it. 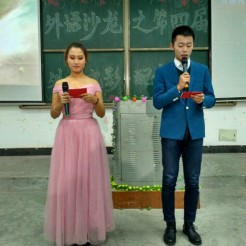 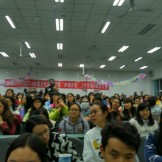 2 responses to “The Dubbing Competition and Just Rolling with It”