Indonesia is an archipelago of more than 17,000 islands and the world’s 4th most populous nation with more than 250 million residents. In the lush area surrounding Sumatra’s Lake Toba in western Indonesia, live the ethnic groups of Batak people. Although the majority of Indonesians are Muslim, ethnic Bataks are mostly Christian. Their homeland around Lake Toba is dotted with towns and villages, rainforest and palm oil plantations, church steeples, rice fields, fruit and other crops of vegetables.

Saksang (pronounced SAHK-sahng) is an important dish in Batak cuisine. Eaten at weddings, funerals, church celebrations and more, it is used for many cultural traditions, especially for Toba Batak people. It is made from pork, and given Indonesia’s Muslim majority, this dish is therefore unique and rare in the country.

For a foreigner living among them, it is almost certain to be encountered. In my life at the dormitory of the Deaconess Theological School in Balige, I saw the entire process six times and ate saksang regularly as I attended occasions where it was served.

Now, here it is, a brief exploration on how to make saksang:

NOTE:  Here I want to share about a cultural dish from where I lived in Indonesia, but I’m warning any readers that aside from a general description I give, a few of the photos below are a bit graphic, as there’s chopped up pig parts in them. I hope, however, that by sharing this–something considered normal in its own cultural context–I bring what would otherwise be unknown to my readers.

Below, a gallery. Saksang: how it’s made.

It is common for Batak people to keep pigs.

It takes a lot to hold the pig down.

Once dead and blood drained, the skin is blowtorched.

Scraping off the skin of pig, preparing to make saksang.

Cutting up the pig

More spices to be mixed in the saksang.

Spices and blood mixed into the minced meat and stirred. 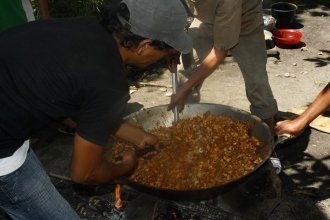 Stirring takes a lot of effort.

The pig’s head, used as a prayer of blessing.

Receiving the blessing before I ended my service.