The elderly woman’s body lies inside the house in a coffin covered only by a thin white veil. Aside from the coffin, the room is void of furniture. A dozen members of the family and surrounding village sit cross-legged on the multi-colored plastic woven mat spread across the tile floor. I add my sandals to the pairs already stacked in front of the open door and step inside.

Delviana Naibaho—a co-worker at the Deaconess Theological School where I teach in a town a three-hour drive away on windy pot-hole ridden roads through the Sumatran rainforest—greets me. I call her “Ibu,” a word that means mother, but is also a polite form of address for women akin to “ma’am.”

Today, to show support to Ibu Naibaho, I attend her mother’s wake with a delegation from the school.

“Turut berduka cita, bu,” (my condolences, ma’am), I tell her as we shake hand and sniff cheeks in the Indonesian manner.

Abiding by Batak custom, I greet everyone in the room with a handshake and a light touch to my heart, saying “Horas,” a Batak word of greeting.

The family and villagers discuss details about the upcoming funeral party in their native Batak language. Someone translates: they can’t afford to kill a buffalo, so they will kill a pig to make the saksang.

In Batak culture, saksang—a dish of minced pork (or buffalo) cooked in blood, coconut milk, and an assortment of spices—is used in a variety of rituals including church celebrations, weddings, and funerals. Most Batak people are Christian, and the many rituals I experience here have become inseparable from faith. For funeral and wedding parties, Muslim Bataks will be served an alternate dish without pork.

Wakes in Batak culture last a few days as the body stays inside the home, waiting until the funeral. A funeral party and ceremony take up an entire day, often held in front of homes on busy roads or a residential street. Plastic chairs set under a tarp to protect from sun and rain, and billboard-sized condolence cards line the streets with Selamat Jalan or Turut berduka cita (Goodbye and condolences, respectively) spelled out in colorful silk flowers tacked to a black or dark background. The church service and burial come at the end of a full day of cultural customs.

To the uninitiated Western eye, it is not a neat affair on the surface—people and children mill about and make noise everywhere, cars pass by, garbage is thrown on the ground, loud voices talk over each other on microphones, and music starts and stops—but for the Batak people, the day has a distinct purpose and order (family, community, culture, and prescribed rituals).

The family caters food that will feed the whole gathering (which can number over a hundred), and visitors–who are often in related family surnames called Marga–give their respects and envelopes of money to the family of the dead as a condolence gift. Ulos, ceremonial hand-woven blankets, are worn folded over the shoulder and more are exchanged and given to the family. Blessings are given and received through traditional dance knows as tortor. Women give offerings in woven baskets carried on their heads. All this while the coffin covered only in a veil sets in the center of activity.

As the wake continues, I sit down against the wall in the house on the other side of the room, my eyes locked on veil-covered body of Oppung (the Batak term of respect for the elderly); a portrait of her from some years earlier sits on her right shoulder against the edge of the coffin.

I’m in a room with a dead body; there’s no one crying.

Then a memory comes back to me—twenty years ago this very day I stared at my grandmother’s coffin. Grandma’s death wasn’t unexpected. Due to confusion resulting from Alzheimer’s disease, she had burned herself while taking a bath six months earlier and had had declining health since. At nearly twelve, I wasn’t ready to let go of my grandma—tears flowed at the funeral full of sorrow and loss. I spent years unpacking why she had to die. Twenty years later, I’m experiencing the rituals of the dead in a very different manner. Today I sit among others in a room with a dead body; there is no one crying.

At the funeral for an elderly Batak person, one is likely not to find tears. A friend told me they are “happy” because the elderly person lived a full life. Indeed, I once attended a funeral where children sat calmly next to their grandfather’s coffin, not hiding their boredom, while their parents smiled and received a long line of guests. Grief happens, but the emotion is reserved for private moments and expressed more openly with tragic deaths of the young.

Yesterday I accompanied Arlisna, one of my students, to her father’s grave, not knowing I’d come to a wake the next day (life in Indonesia is full of the unexpected). Arlisna is 20 years old and leads worship for the home-bound elderly in her village. After the worship, we ate lunch in her home, sitting on the concrete floor eating rice, hard-boiled egg, and tofu with our bare hands. She invited me outside to see their rice paddy and then to the grave.

Shaded by a roof overhead, the grave overlooks the village and surrounding fields, a peaceful spot to rest in the sweltering afternoon heat. Arlisna’s invitation to view her father’s grave came as natural as the invitation to eat—and as natural as the welcome I receive at this wake. Nevertheless, I still hold discomfort in my body to be present in these moments which my culture of origin consider private.

Sometimes when I am teaching, a single bell in a low tone rings from the nearby church. Ding. Pause. Ding. Pause. Maybe four or five times this way, signaling the death of a church member. Without fail a student will say, Selamat jalan. It means goodbye, have a good journey, and said to the person leaving by those who remain; in this case, goodbye to another soul departing from this earth.

Arlisna isn’t the only one of my students to have a parent die so young; sometimes I can see grief and other troubles that weigh on their hearts. They console each other in Indonesian by saying sabar (patience) and give encouragement with semangat (spirit, enthusiasm). “Keep spirit, Sister!” they say to me when I’m sad.

I walk over and kneel beside Oppung’s coffin. I don’t know much about her life or how she died, but that doesn’t matter anymore. I am present with her family and Ibu Naibaho, who was blessed to have had her mother for so long. I, too, was blessed to have my grandmother, even though I was young when she passed away.

“Selamat jalan, Oppung,” I whisper to the body in the coffin.

And for those of us who still walk the earth: Selamat jalan, wherever this life’s journey takes you; let’s keep spirit. 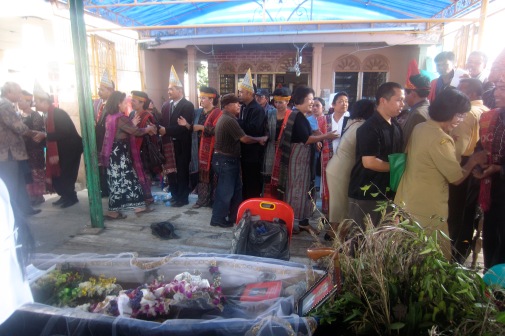 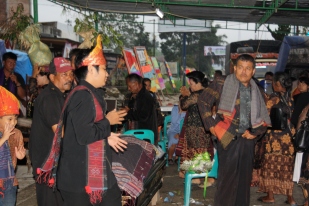 **Note: The story is real, although these photos were taken from a different funeral party. I share the gallery to illustrate the ritual of Batak funeral parties. Unfortunately, I do not have any photos from the wake in my story above.

I write stories and share photos from life’s journey.

Thanks for following the journey. Please consider contributing to help maintain this site.