The people I meet: Cambodia 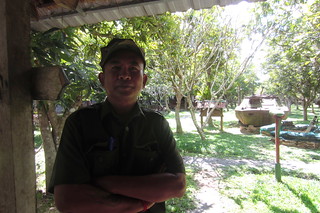 This is Suon. He is a victim of the war and devastation caused by Pol Pot’s Khmer Rouge in Cambodia from 1975 to 1979. I met Suon while taking the tour at the War Museum in Siem Reap. The museum itself is little more than rusting old tanks, and an assortment of guns, landmines, and photographs. What makes the experience real are the personal stories of tour guides. Not only did I learn about Cambodian politics past and present, but more importantly I heard a man’s story of suffering and survival.

Suon’s family was killed by the Khmer Rouge and he was taken and made to be a soldier as a boy. His life as a soldier ended when he stepped on a landmine that blew off his right leg. The recovery was long and difficult without any family. Now he makes a living as a guide at the War Museum. He expressed dismay at the current situation in Cambodia, but hope that change for the good can come. I am amazed that such hope can prevail over cynicism or despair–but it is hope that is necessary to make a better future.

He asked if I had come to Siem Reap because of the half marathon race. Yes, I said. The day before I, along with about 7,000 other participants, had finished the Angkor Wat International Half Marathon. He thanked me because the race was organized to help charities in Cambodia, especially for those who suffer because of land mines. The work to remove all remaining land mines and to care for the victims is ongoing and must continue.

A week earlier I had a brief encounter of hope on the way into Cambodia. The woman who sat next to me on the flight into Phnom Penh was visiting her country for the first time since her childhood. After leaving Cambodia, she became a US citizen and hadn’t returned since. She expressed a mixture of excitement and nervousness to see the country of her birth. Her life was very different than the tour guide’s, but they are all part of Cambodia. I don’t know what happened after we landed, but I hope the time was good for her, and that she found what she needed in visiting her country and with relatives.

I continue to think about Cambodia. I am thankful for the stories I heard and share in their hope for the future.

One response to “The people I meet: Cambodia”